Effective plant selection, establishment and management plays an essential role to the success of conservation projects. BWSR has developed several guidance documents to help ensure the success of projects.

Native Vegetation Establishment and Enhancement Guidelines (pdf) (January 2019) is a comprehensive guidebook designed to assist resource professionals and landowners across Minnesota in meeting state vegetation policies and standards, and to guide the successful planting and management of restoration and other conservation projects. The guidelines are also designed to: 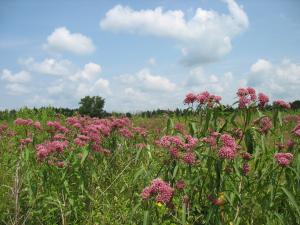 The guidelines are updated periodically as new research and field experience become available.

These guidelines apply to all BWSR programs that have vegetation restoration components, as well as other state programs that have adopted the guidelines. Environmentally suitable native annual, biennial and perennial plant species (following the source selection criteria included in the guidelines) are required for projects to meet legislative requirements and provide multiple landscape benefits.

The guidelines include topics such as seed and plant source requirements, planting dates, diversity levels, and planting guidance by project type.

Additional information on plant selection for specific purposes can be found on the following pages:

Inter-seeding is a practice that is used to increase species diversity in existing remnant or planted prairies. 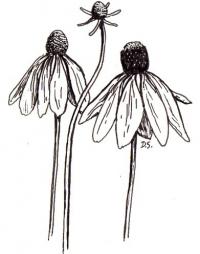 Inter-seeding is most effective in stands where grass is not overly dominant. It does not work well in monoculture stands of switchgrass, and reed canary grass or in Kentucky bluegrass sod.

Forbs and grass species can be inter-seeded. Forbs are generally broadcast seeded while grasses are commonly drilled. Individual species and seeding rates should be selected based on existing vegetation, site needs and project goals.

Site preparation generally involves the removal of thatch through burning or haying to provide light for seedlings. Weed removal through herbicide treatment is sometime needed to decrease competition and open areas for establishment. An alternative method is to cultivate nodes within larger areas for seeding (see details below). A year or longer may be needed for site preparation if perennial weeds are dominant.

Converting non-native grasslands may require cropping for a year or two, or combinations of tilling and herbicide application to prepare for seeding. In some cases, inter-seeding can be successful without tilling, particularly when existing vegetation is not vigorous due to sandy soils or other factors. When removing existing weeds such as smooth brome and goldenrod, fields are typically burned to remove thatch, and then treated with herbicide as vegetation reaches about six inches tall. Several herbicide applications, or combinations of herbicide and tilling may be conducted before seeding occurs. Repeated mowing during the first two years can be important to aid seedling establishment.

In reconstructed prairie (crop fields converted to prairie) inter-seeding is most commonly conducted after a prescribed burn. An alternative method is to conduct a spring application of glyphosate herbicide to stunt prairie grasses that dominate the site. Forbs are commonly broadcast in the fall or late winter to increase diversity. Species with larger seed such as grasses can be drilled with a no-till drill. Repeated mowing to 6-8 inches is recommended during the first year to allow light for seedlings. Mowing into the second season may also be beneficial.

In stands of native or nonnative grasses a technique that has been successful involves establishing 15 feet by 15 feet nodes within grass-dominated stands. Approximately 25 percent of the site should be covered by nodes. Nodes should be prepared with a tractor mounted roto-tiller in October followed by dormant (late October) broadcast seeding. As the nodes establish they will generate a source of propagules to colonize the surrounding vegetation matrix and increase species diversity (Grygiel et al. 2009) across the site. Prescribed burning in subsequent years will aid the spread and establishment of species planted in nodes.

Inter-seeding into remnant communities should be planned by an experienced resource manager. In most cases, only seed collected from the remnant, or very local sources is used. Seeding after prescribed fire is the most common method of inter-seeding remnants. Disking or other soil disturbance should not be used in remnants as a means of incorporating seed.

Seeding should be timed to correspond to site-preparation methods. The installation of forb seed is commonly conducted in late fall or late winter. Seeding during these times of year provides time for forb seeds to be stratified (break dormancy). Late winter seeding is generally conducted when there is less than a foot of snow and temperatures are around freezing or slightly higher. An advantage of seeding in late winter is that freeze thaw action can help incorporate seed into the soil. Inter-seeding can be conducted in spring or early summer, but some type of packing or dragging is beneficial. A potential strategy is to broadcast forb seed followed by seeding grasses with a seed drill that is equipped with a roller that can enhance establishment by promoting seed to soil contact.

During the first two years after inter-seeding, burning should be avoided to prevent damage to seedlings. Mowing is an important method to promote seedling establishment and growth after seeding. Frequent mowing (bi-weekly if possible) to a plant height of 6-8 inches is recommended for two seasons in non-native grasslands and restored/reconstructed native prairie.

Monitoring the success of inter-seeding efforts is important to better understand the effectiveness of methods and to guide future efforts.

Getting Started in Prairie Revegetation, A Recipe for Success, USDA, NRCS, 2005.

Increasing Diversity in Prairie  Restorations – Why and How, Chris, H., Packard, S.

Roadsides can be important corridors for plant diversity and wildlife species, including declining pollinator species. However, they can also contain invasive plant species that threaten biodiversity. This fact sheet was developed to provide guidance on how to manage problematic invasive plant species and noxious weeds, such as wild parsnip and introduced thistles, while also maintaining plant diversity. Guiding principles are listed below as well as links to additional information. 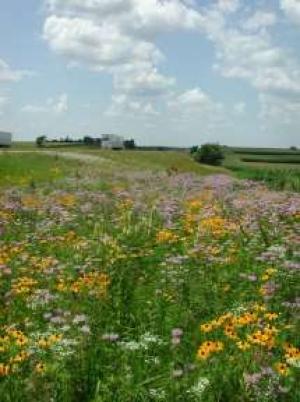