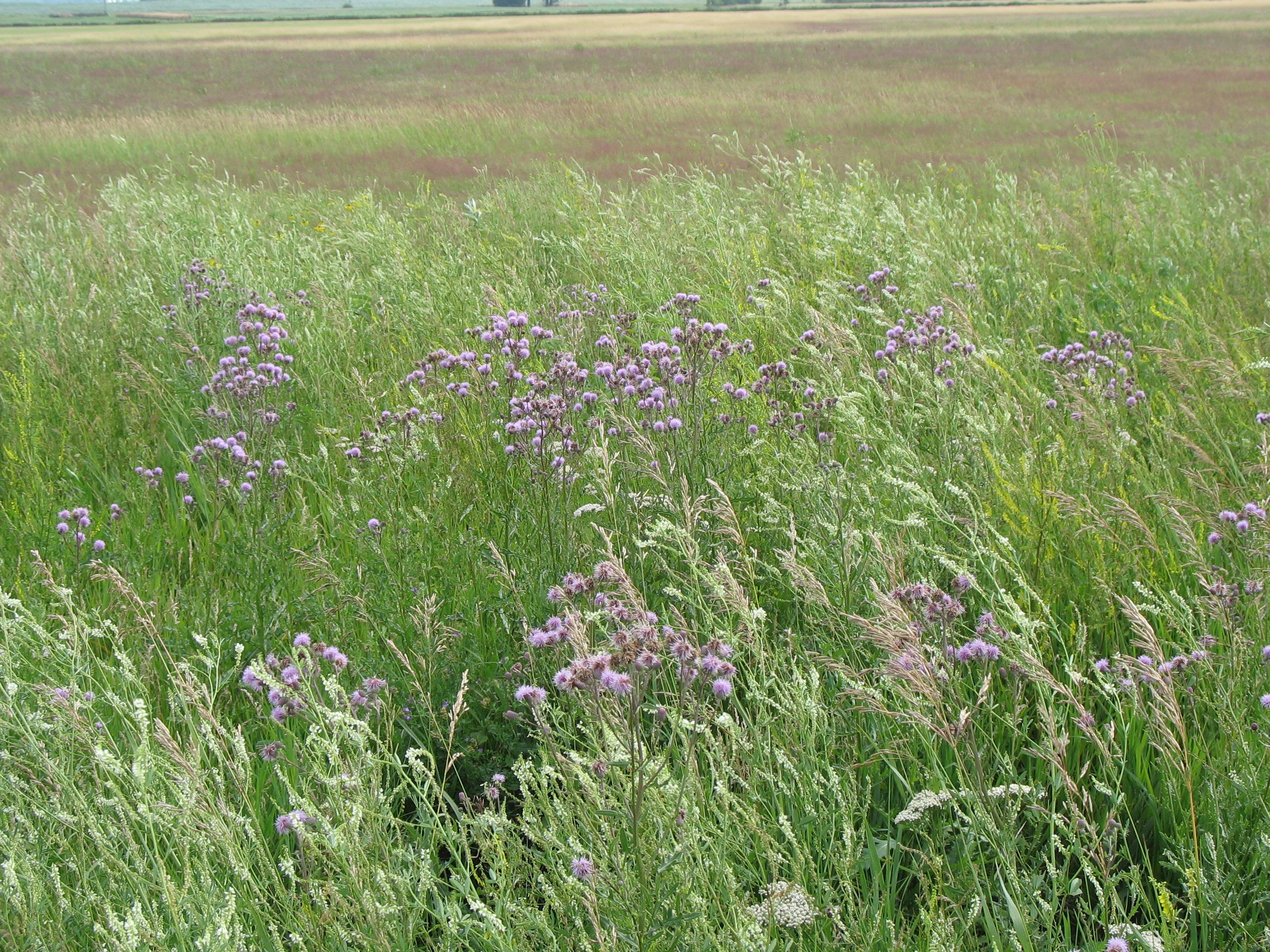 Some exciting nuggets from recent research:

Conservation Easement Management: The window is short for spot spraying and it can be hampered by the large areas of dead vegetation that blocks ones view of the small plants at their most vulnerable point.  It would have been best to burn off the property corner to corner each year to help achieve control, but burning can really spur a resurgence of thistle growth. Spot Spraying mechanically looked like a solution but ended up to be a serious pain in the back. I used Milestone and felt that I was making progress, even though I would run into a time issue dictated by the budding and flowering of thistle.  Thistle normally is in full flower on July 4th.  Outbreaks would occur and I would eventually park my sprayer.  I then took to the field with a 1974 John Deere 4430 and a John Deere Model 27 Flail Shredder. Later, I purchased a Woods BT180 Series 3 Bat Wing Mower that would allow me not only to combat thistle but I could now mow down trees up to 2".  It clips down 4 ft+ vegetation down to 3 inches.  This was nearly effortless. The outside 15 feet of my service path that I clipped last year is for some reason free of thistle.  I did go selectively along edge with 6' ATV boom and sprayed Milestone on the thistle patches I saw. I mowed down a large patch on the inside edge of a berm and then followed up with broadcasting milestone.  No thistle survived this practice. Milestone really works great when applied in the fall on clipped plants.  The thistle plants get brown and do not re appear in the spring.   This technique works well on large patches. Mowing and Milestone treatments in dry conditions, during the time between bud and flower, also seem to work well. Trying to manage thistle can seems futile.  The key is to realize that the objective is to reduce population, not eliminate it. (Dan Ruby, Ruby's Wetland Bank, LLC)

Prevention:  Staying ahead of thistle can be difficult; the best plan of action involves having good timing, and using the combined methods of mechanical and chemical control to treat the plant before the flowers go to seed. Mature thistle plants can contain up to 10,000 seeds per plant, and has an aggressive root system that continually produces new shoots (Farm Bill Partnership Staff).

Clipping:  Mechanical treatment will be the most effective in areas where thistle is cohabitating with the desired flower species in a native prairie, as spraying will be harmful to the broadleaf forb varieties. For thistle intermixed with desired natives, clipping multiple times in the growing season to approximately 1’ with a mower attachment that does not create windrows, will allow for  the growth of desired natives, while also not allowing the quick growing thistles to go to seed (Farm Bill Partnership Staff).

Spraying: Areas that are dense with thistle and not with native flowers can be broadcast sprayed, as the grasses will not be affected by the broadleaf herbicide. Backpack or handheld spray works best for small areas. (Farm Bill Partnership Staff)

Timing of Seeding:  If you have a Canada thistle problem (or other perennial noxious weeds), and want to establish wildflowers in your project area, don’t seed them at the beginning of the project. You may well wind up killing them all with herbicide to get the thistle under control. Seed only grass at project start, then invest 2-3 years in concentrated herbicide work to get the thistle under control. Once thistle is controlled, do a spring or fall burn and inter-seed forbs (Dennis Pederson, Habitat Forever).

Competition:  For Canada thistle, if can be done, very aggressive, competitive plant communities that maintain cover will eventually relegate C thistle to fragmented patches or none at all as in the case of diverse, aggressive prairie communities or sod-bound brome on productive soils, or aggressive rotational grazing systems.  Sites with continual disturbance such as periodic flooding, traffic, low fertility, non-productive soils with perpetually open niches for invasion are problematic (Roger Becker, University of Minnesota Extension).

Competition:  In plantings where primarily warm grass species were planted and early succession forbs are absent, thistles have no competition and often reach maturity before warm season grasses like big bluestem and Indian grass even start to green up. Having a strong Canada wild rye component as well as composite forbs, like black eyed Susan and Yellow coneflower seems to put pressure on thistle populations (Martin SWCD).

Outreach:  Renville SWCD has developed a landowner handout giving recommendations regarding chemical control for Canada thistle as they have nearly 400 RIM/PWP/CREP easements requiring management. The SWCD strongly recommends Milestone application in both spring and fall and has found that to be the only effective way to control thistles. The handout works for not only landowners, but is also given to other interested parties and to Township Boards as they try to administer the Noxious Weed Law (Renville SWCD).