The net sum of all carbon inputs and outputs from a system – like a forest, grassland, city park, or farm field – is called the "carbon balance." Inputs include woody biomass and fallen leaves, branches and soil organic matter, outputs include tree respiration and decomposition of soil organic matter and harvested biomass.The illustration shows how trees capture carbon dioxide (CO2) and sequester carbon as an effective method of reducing atmospheric concentrations of CO2. 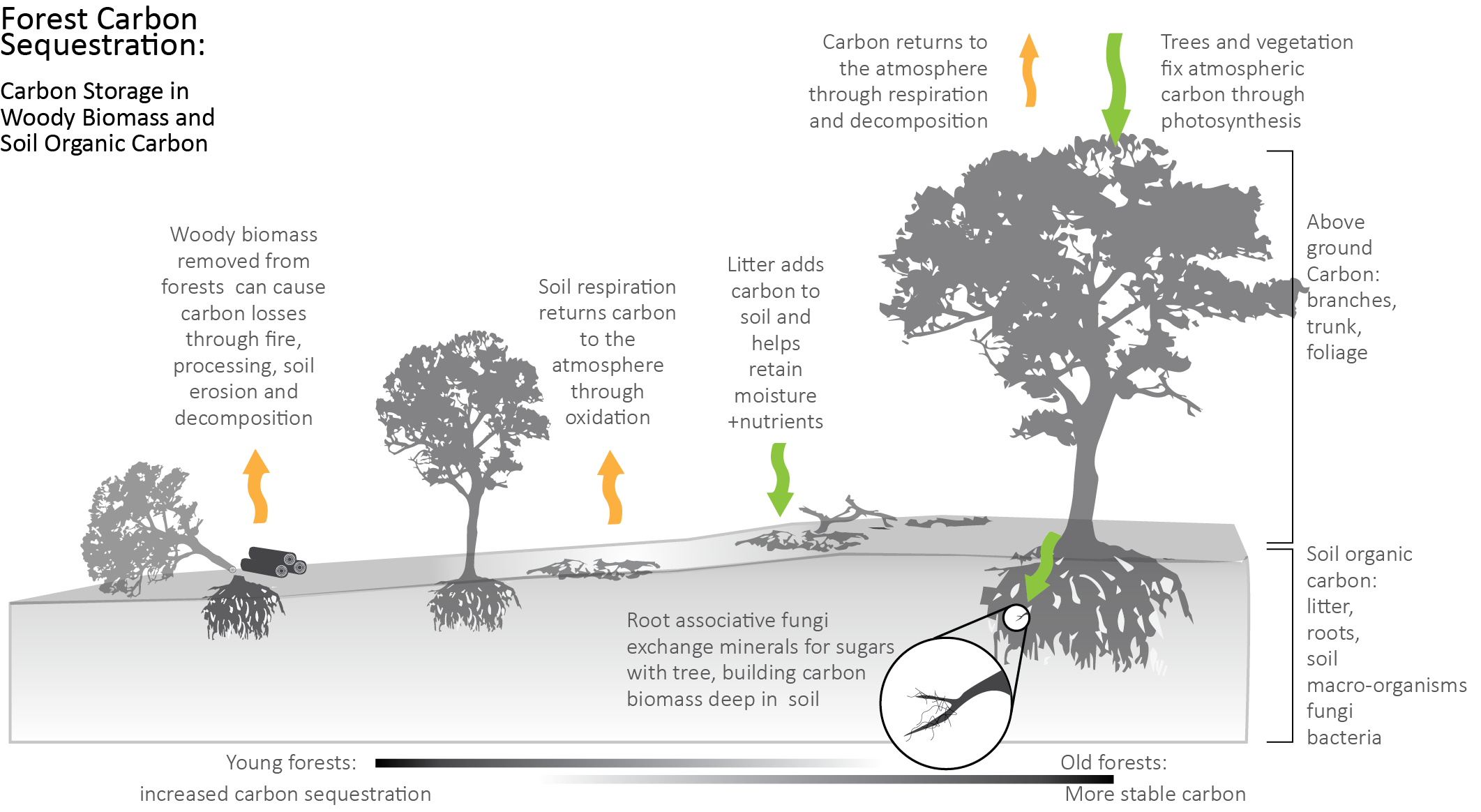 The Carbon Cycle of Forests

Trees, like all other plants, fix atmospheric CO2 through photosynthesis and convert it to biomass and other materials necessary for metabolism. Above ground, most of forests’ long-term carbon storage occurs as woody biomass. Some of that carbon becomes soil organic carbon through addition and decomposition of fallen branches, leaf litter, and dead roots, and recent study found that 50-70 of soil carbon storage in boreal forests occurs in roots and root associated micro-organisms and fungi.2 . The remaining carbon is released back to the atmosphere from tree respiration and the decomposition of soil organic matter.

Storing carbon in woody biomass is a good choice because it is a stable, long-term carbon pool. Even if a forest is no longer sequestering additional carbon or is sequestering it at low rates, the carbon previously sequestered in biomass is preserved for a long time because wood decomposes very slowly and tree roots prevent erosion and subsequent oxidation of soil organic carbon.

At a certain point in time trees no longer sequester additional carbon but instead maintain a constant quantity of carbon. This steady state condition occurs when the carbon gained from photosynthesis and the carbon lost from respiration is equal. Different tree species reach steady state at different times, somewhere between 90 and 120 years.2,3 Research indicates that late successional forests have more stable steady-state carbon pools because of a larger biomass of root associative fungi below the zone of decomposing fungi found in the oxygen rich upper soil layers.1, 2, 3

Deforestation is caused by complete harvest of a forested area, or by prolonged degradation that leads to the destruction of a forest. About 25% of all anthropogenic (human-caused) CO2 emissions are due to deforestation. Avoiding deforestation altogether maintains the carbon stores in tree biomass and reduces soil organic carbon losses from soil respiration as a result of soil disturbance. Increased hazards to forest systems due to climate change such as drought, wildfire and insect related mortality, may make forests less stable carbon storage than they have been in the past.1