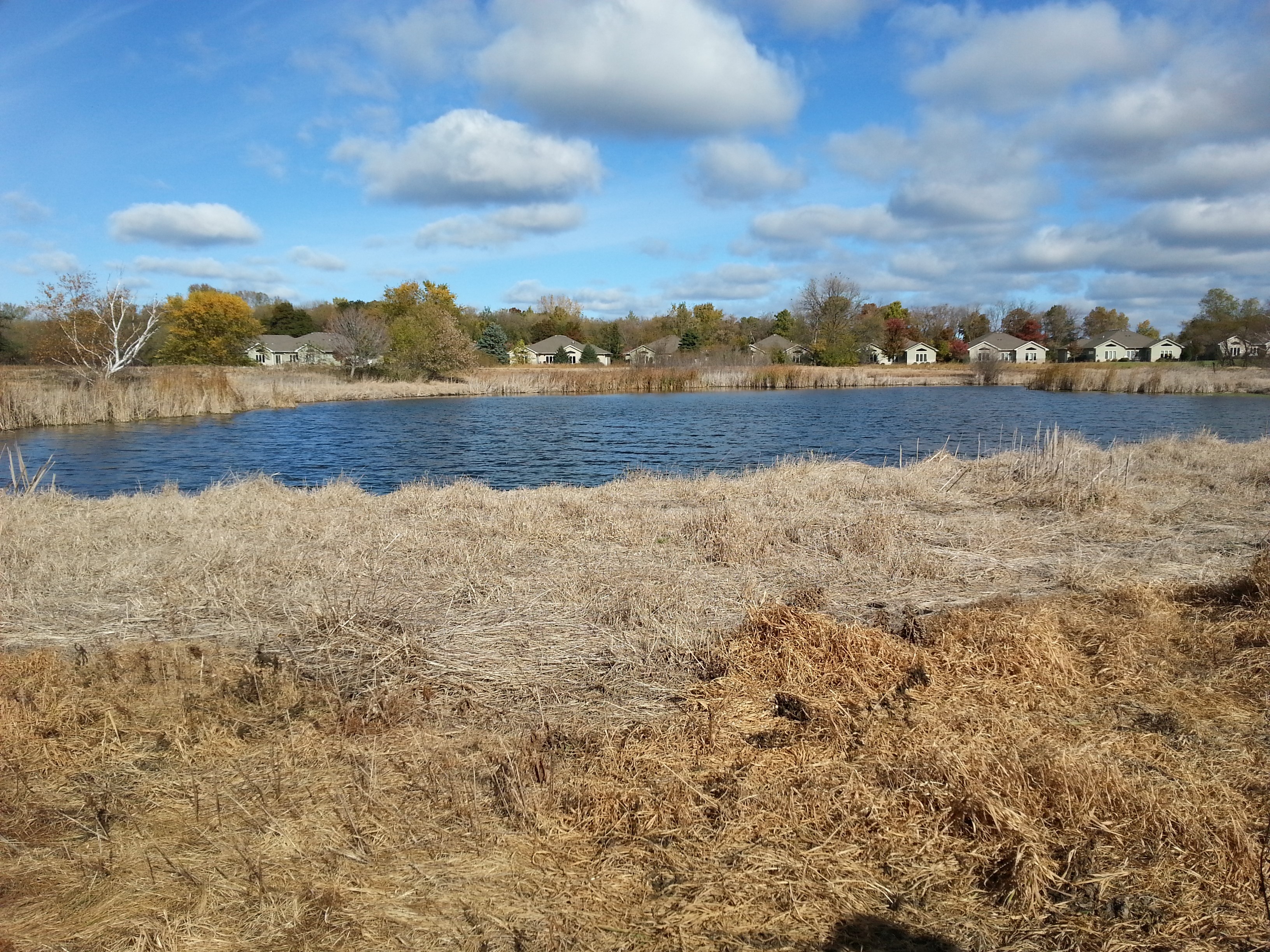 Herbicides: In controlling reed canary grass, use of a mixture of 1.5% aquatic imazapyr and 3% aquatic glyphosate shows long-lasting effect. Photo to the right shows an area closer to water’s edge which was sprayed in June. The other section was sprayed in September. This occurred on peat soils. (Carol Strojny, Minnesota Board of Water and Soil Resources)

Herbicides: Improve long-term control with a combination of Habitat and glyphosate: the Nature Conservancy completed a study in 2008. In this study, they found Imazapyr alone is sufficient, and does a good job of controlling Phalaris.  The addition of Glyphosate does not seem to either increase or decrease this efficacy however, Glyphosate is good as a long-term ‘spray indicator’.  Damage from Imazapyr does not become apparent for up to 3 weeks, whereas damage from Glyphosate is apparent after a few days.  Using Glyphosate allowed more efficient re-treating areas that had received an initial spot treatment.   Imazapyr (alone or with Glyphosate) is quite effective on Phragmites and Typha as well as Phalaris, and can be used to treat all of them simultaneously.  1.33 oz Imazapyr/gallon of water.  For Phragmites and Typha, bump it up to 1.3%.  You can also use a non-ionic surfactant at 0.25-0.5% depending on conditions and phenology.  Imazapyr persists in the soil for at least 6 months, resulting in bare soil, which can potentially cause erosion issues.  Both on sand and on heavier soils, no soil mobility was observed.  This soil persistence is good, though, because it controls both seedlings and dormant buds on the rhizomes.  Once the Imazapyr degrades, there was good colonization by native species, especially if also spot treating in an otherwise nice natural area.  Ditchbanks are usually re-colonized by weedy species, but one would expect that. After a Imazapyr application, do not seed an area until you start to see other plants recolonizing.  Any seedlings that germinate prior to this would die.  6 months is just an average, as it has been observed to vary by a few months either direction.  If you are controlling Phalaris this spring, it might be good to plan on planting in the fall after things have gone dormant.  In Indiana, in general, there are really good results with late fall/winter seedings.  One word of caution - occasionally Cirsium arvense becomes ‘released’ from competition while using Imazapyr and/or Glyphosate, especially in fens.  Neither chemical does more than top-kill the thistle, so if there is some C. arvense present, you will need to address that separately.  Aminopyralid is preferred.  C. arvense, and Equisetum sp. seem to be about the only plants not killed by Impazapyr. (Stuart Orr, Nature Conservancy, Indiana)

Herbicides: Glyphosate at 24 oz/acre with NO surfactant  (e.g. original formulation of "Roundup, or any generic that does not have the word "plus" in the label..ie "Bucaneer Plus" has surfactant, but "Bucaneer" does not.)  In the metro area I start spraying AFTER Oct. 10th.  At this time many native species are dormant, but reed canary is very susceptible.   I have sprayed as late as Halloween with good results.    Hard frosts do not seem to matter.  So long as there is any hint of green, even pale faded green, on the reed canary leaves the glyphosate is very effective.   I find this to be much more effective (~100 kill of adult plants) than spring treatments, and the big plus is that many native species are unharmed.  I only use this treatment on plantings that are at least 3 years old....do not use on first year plantings. Also do not use near open water (as not aquatically certified). If the reed canary has been mowed in previous two months, the treatment is still very effective, but is also more likely to hurt the native species.   If I plan on spaying a field for reed canary grass that has lots of native species, I either do not mow it, or only mow before July. Resistant native speices include:  Ironweed, Joe Pye, Golden Alexander, Liatris spp., Indian grass, Big + Little Blue, Muhlenbergii spp., Side Oats, Sunflower spp., Culvers Root, Ohio Spiderwort, Milkweed spp.  and many other.Native species that are hurt by this method include: Bergamot, Yellow Coneflower, June Grass, and Black-eye Susan (Shawn Schottler, Science Museum of Minnesota ).

Grass Specific Herbicide: A wetland bank project in Ottertail county has had success mowing reed canary grass in September followed by an early October application of the grass specific herbicide “Select” with the active ingredient Clethodim. The application allowed native sedges and forbs to dominate where reed canary grass was present.

Sequencing; A combination of weed whipping flowers to prevent seed production, dormant overspray with an aquatic formulation of glyphosate, and spot treatment with glyphosate and sethoxydim (during dry periods) has led to a dramatic reduction in reed canary grass cover and a substantial increase in three square bulrush abundance in a lakeshore/wet meadow restoration (Ramsey Washington Metro Watershed District).

Scraping: Scraping to 8-12 inches to remove reed canary grass mat. Full removal of rhizomes is needed. This technique should only be used where there is expendable soil, preferable where sediment has accumulated.