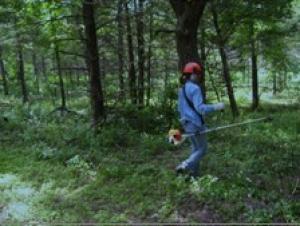 Sequencing:  With controlling buckthorn, both in highly infested sites and those with low level infestations we have found persistence to be the most important element of control.  In highly infested fire dependent woodlands prescribed burning is a very efficient means of control when it follows an initial removal.  Keeping in mind the seed bank that has accumulated and the fact that they are viable for at least 7 more years, it has been imperative to keep knocking it back.  In high level infestations, we have found prescribed burning, as frequent as leaf litter accumulation will allow, to be the most efficient choice as long as the buckthorn regeneration is smaller than ¼”.  To keep it small – we have been doing critical period cuts.  In July – when the plant has spent all the energy it will on growth for the year – we go in with brush saws and cut it all – forcing it to re-sprout and expend more energy on growth – when it would have otherwise been pulling energy into its root store.  By the time it has grown back there is relatively little time left in the growing season for it to pull energy down in to its depleted root system.  Then in the spring burn season – all the water sprouts that were caused by the critical period cut are small and tender – vulnerable to fire.  With this method – we do end up cutting native shrubs but have found diversity of woodland herbs to bounce back dramatically and the native shrub diversity and abundance is gaining strength as well.

In low  level infestations – persistent annual control is essential to preventing degradation of the woodland.  We have coordinated with the County Sentence to Serve Crew.  Even two staff can go through several acres of lightly infested woodland in a few hours.  We arm ourselves with a pair of loppers, a buckthorn blaster http://buckthornblaster.com/  loaded with glyphosate – 50% solution, and flagging tape.  When we run across a large buckthorn that requires a hand saw we wrap tape around it.  At the end of the day – we go back through with the hand saw and get the large ones.  We keep track of where we have been with a GPS – then map it back at the office (Gina Hugo, Sherburne Soil & Water Conservation District).

Adaptive Approach:  Management for buckthorn (as well as other invasives) should be approached with the understanding that only in rare instances will a one-time treatment of the invasive produce the desired long-term result. Developing (and sticking with) an integrated and adaptive approach using multiple tools (cut/treat, fire, grazing/browsing, supplemental seeding, herbicide application, biocontrol-if available, etc.) is critical for success. In areas where fire is to be used as part of an integrated management approach on buckthorn, fine fuels (i.e. grasses, and to some degree sedges) are key. If the pre-existing ground layer lacks fine fuels, supplemental seeding with native grasses such as bottlebrush grass, silky wildrye, Virginia wildrye and others is important. Along with oak leaf litter, fine fuels are critical to enable burning with appropriate frequency and intensity to keep ahead of buckthorn. I generally discourage soil disturbance. Removing thick stands of buckthorn creates a vacuum that can be readily recolonized by buckthorn or other weeds. Soil disturbance (i.e. by using a weed wrench or similar) also has the potential to also damage desirable native plants (further increasing the likelihood that undesirable plants will recolonize). Unless the site is exceptionally native species-poor AND supplemental native seeding will be conducted, soil disturbance should be avoided (Paul Bockenstedt, Stantec).

Landowner Recommendations:  The following are some recommendations for buckthorn removal. I advise landowners to remove female plants from the entire project area. The seeds remain viable for 5+ years, so I advise them to the go back to those areas and expect to pull the small new growth before it becomes big. Landowners have used Garlon 4 and Pathway with a surfactant (I had someone who used Element, it cost less and has the same active ingredient as Garlon 4 and worked well). Chemical treatment has been used successfully on smaller stems (< 3” in diameter) as a basal bark application. For stems over 3” we use either a cut stump method or girdle and apply product to the stem. For this treatment I advise that fall and winter if accessible is the best time for application. Burning or torching small growth is effective if the landowner is comfortable with working with fire. Planting desirable species is advised. Maple and Walnut trees stands have been notably lacking invasion, even in the midst of surrounding invaded areas (Terri Peters, Wabasha CWMA).

Landowner Information:  The following information summarizes input from landowners who participated in a cost-share program. We are also creating a web-page with Frequently Asked Questions: http://www.mnwcd.org/land_habitat_restoration_invasive.php

Timing: Managing buckthorn in the fall after other trees and shrubs have lost their leaves can be effective timing to find young and old plants (www.dnr.state.mn.us/invasives/terrestrialplants/woody/buckthorn/index.html).

Basal Treatment: Basally treating the lower 10 inches of sapling and larger buckthorn with Garlon 4 in the dormant season. 10-20 percent mixes for smaller trees and 40 percent mixes for larger trees has been a successful treatment method (www.smm.org/scwrs/publications/rendezvous/2005/basalbark/).