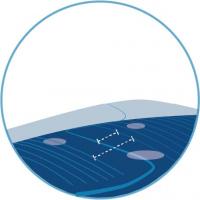 A primary step in the design process involves determining if the project needs to be part of a larger system of BMPs sometimes called a “treatment train.” Essentially, buffers do not function when relied on as the “last defense.” A vegetated buffer along an agricultural field may be overwhelmed by frequent runoff, particularly during frozen soil conditions. Plant communities such as sedge meadows may be invaded by reed canary grass or cattail when subjected to frequent water fluctuations. Other conservation practices such as a storage basin, grass waterway, shelterbelt, living snow fence, wind break, or no-till fields may protect water quality above the riparian zone. Creating a linear retention area as part of side inlet protection can help slow water, allowing deeprooted prairie plants more time to infiltrate stormwater. The need for additional BMPs often depends on the type of pollutant that will be treated. Following is a summary of pollutants commonly treated with buffers and their design considerations.

In urban areas, series of raingardens, filter strips, detention, retention ponds, and treatment  wetlands can manage large stormwater volumes and settle sediment and other pollutants that may overwhelm a riparian buffer. Stormwater models mentioned earlier under “Site Assessment” can be effective tools for assessing when additional BMPs (or modifications to existing BMPs) may be needed in addition to riparian buffers. Information about BMP design can also be found at the following links.

Buffers are commonly designed for wildlife and water quality benefits but there are many other benefits that can result from buffers, some of which provide financial incentives to landowners. Identify key goals for buffers early as they will influence all phases of the design process. Keep in mind that multiple goals (also called “functions” in this toolbox) may be met by a single buffer. For example, a prairie planting planned for stormwater filtering may also accomplish carbon  sequestration and provide habitat for ground nesting birds. If a buffer is planned as part of a system of BMPs, even more goals can be met. The following are design considerations for a range of buffer functions:

Buffers must be designed to fit within the existing landscape context. In urban areas, it is often necessary to design buffers in combination with lawns. Visual separation (“cues for care”) created between the lawn and buffer can use split rail fence, edging, rock, or other design elements. In agricultural areas, buffers may need to work adjacent to agricultural fields where herbicide may be applied. It may be beneficial, in this instance, to plant a dominance of warm season native grasses that can bounce back from some overspray of herbicide or plant a zone of woody vegetation to intercept herbicide drift.

Interconnected natural areas are essential to plant and animal populations pressured by habitat fragmentation. For some wildlife species, connectivity to intact habitat patches may be more important than buffer width. Connectivity sustains reproduction, nesting, juvenile growth, feeding, migration, dispersal, cover, shelter, and overwintering habitat. Connectivity is particularly crucial for reptiles and amphibians that overwinter in aquatic areas but use uplands for nesting and  feeding. Connectivity is not just for animals—plants also need extended areas for reproduction and dispersal.

To minimize edge effect, plan vegetation to be consistent with adjoining plant communities. Avoid planting shrubs in grassland habitat, as shrubs and trees can be detrimental to grassland bird nesting. Buffers on the edge of wooded areas should be planted to transition in height to meet the adjoining trees. Buffers should also be planned as wide as possible to minimize edge effect. Large multi-acre buffers will decrease predation and prevent sites from becoming a habitat “sink” where wildlife populations wither due to high predation rates.

The characteristics of existing riparian buffers can vary greatly depending on the location within the state, the amount of disturbance that has occurred, and recent landscape changes. In the northeast part of the state, buffers are usually forested. In the southwest, they are bordered by open grassland or agricultural fields. Between these extremes, there is great diversity in the structure of riparian buffers and the waterbodies that they protect. Any natural plant community type can act as a riparian buffer, including forest, savanna, prairie, and wetlands that border open water. (DNR plant communities link). Riparian buffers along lakes and waterways provide a key role in protecting essential aquatic and terrestrial habitat and are home to a wide array of state listed plant and animal species. Locate new buffers strategically where they can most effectively protect important natural resources. Existing buffers and other natural resources must not be negatively affected as part of landuse changes or even the establishment of new buffer plantings. In some cases, erosion control fabrics, silt fence, and other means may be needed to minimize damage to resources. The following links provide detailed information about strategies to protect buffers.

Individual wildlife species have unique needs, though in many cases ecosystems are managed with the goal of creating habitat for as many wildlife species as possible. Specific wildlife, particularly those in decline, are the focus of some restoration efforts to benefit that particular species. For example, there is research showing that some grassland birds prefer habitats with diverse grasses and forbs rather than monocultures or simplified mixes of grass. Other research has shown that floral rich planting can provide important pollinator habitat. Information about the habitat requirements of individual species is also useful. Fact sheets about habitat needs for specific wildlife species are available from the Natural Resource Conservation Service website.

Pesticide drift is a concern for pollinator populations that may use buffer areas. As a result, forbs are not recommended in buffer strips that are thirty feet wide or less and adjacent to cropland where pesticides are applied. Refer to NRCS Agronomy Tech note #9 for mitigation practices related to protecting pollinators from pesticide applications.

7. The Role of Riparian Vegetation

It is widely recognized that vegetation helps to stabilize stream banks and reduce rates of lateral stream bank erosion but there are important differences in the benefits provided by vegetation types in relation to stream size. In general, herbaceous vegetation provides greater surface protection and is more effective at reducing fluvial erosion (erosion via river flow) and sheet erosion over the surface compared to trees. However, trees have greater large roots at depths greater than 1 meter and so provide a deep anchoring effect as well as transpiring more water from the stream bank, reducing the risk of bank collapse. A mixture of trees and grass may be most beneficial for medium-size banks between 2 to 4 meters high, providing an optimal mixture of surface cover, deep anchoring and plant transpiration. At heights exceeding 4 meters, gravity-driven bank collapse (mass-wasting) becomes the dominant erosion process which vegetation has little control over. In these situations such is found on large bluffs, geotechnical approaches are needed if the slope is threatening infrastructure or is unusually problematic. (Chris Lenhart, University of Minnesota).

Recommended ways to apply this information to buffer placement and strategy:

Increased vegetative cover and root depth have the greatest sediment reduction benefit on  erodible stream banks of moderate height (<4 meters). This size range includes many of the mid-size streams and rivers in Minnesota.

At heights greater than 4 m vegetation plays little role in the long-term sediment yield from bluff and high banks. Projects to control sediment in these situations need to address geotechnical considerations and should only be applied in certain situations and with much caution. 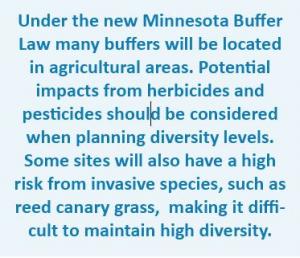 Diversity levels for buffers should be based on the functional goals of a project as well as the site assessment information. Establishing relatively high diversity can provide many benefits including more resilient plantings but site stressors such as invasive species, herbicides or pesticide overspray, or frequent mowing may limit potential plant diversity. These stressors should be considered when planning seed mixes. Areas with wider buffers and fewer potential impacts may be well suited to using higher diversity levels that will provide habitat for a wide variety of wildlife species including pollinators and other beneficial insects.

Many factors can influence the width of a buffer including the following:

When wildlife habitat is a primary goal, consider that different species have varying needs for buffer width. Many species need connectivity between upland and aquatic habitats to have access to food and water, nesting, reproduction, and safety from predation. It is frequently beneficial to have a buffer that is wider in some areas than in others. It is a priority when connecting to habitat patches and corridors.

When water quality is a goal, buffer width will depend on the treatment to be accomplished for specific pollutants and slope characteristics. As with wildlife buffers, water quality buffer width should vary depending on site conditions. Steep slopes reduce infiltration, as do finer-textured
(clay) soils. If runoff is uniform over level topography, a fixed-width buffer may suffice. As a general rule, buffers should be established parallel with landscape contours to promote shallow flow across the buffer. Where water flow is more concentrated (such as swales), buffers should be
wider and thickly planted to help spread out the force of flowing water. A runoff area-to-buffer ratio of 20:1 or less is recommended to maximize pollutant removal.

In any but the most simple, low-and-steadily-sloped landscape, a map of runoff areas and  corresponding buffer location, width, and composition will help you plan for best control. Wide upslope areas that contribute greater loads will require wider buffers. The exact ratios will vary along the length of the buffer.

The following table from the NRCS “Filter Strip” Practice Standard: 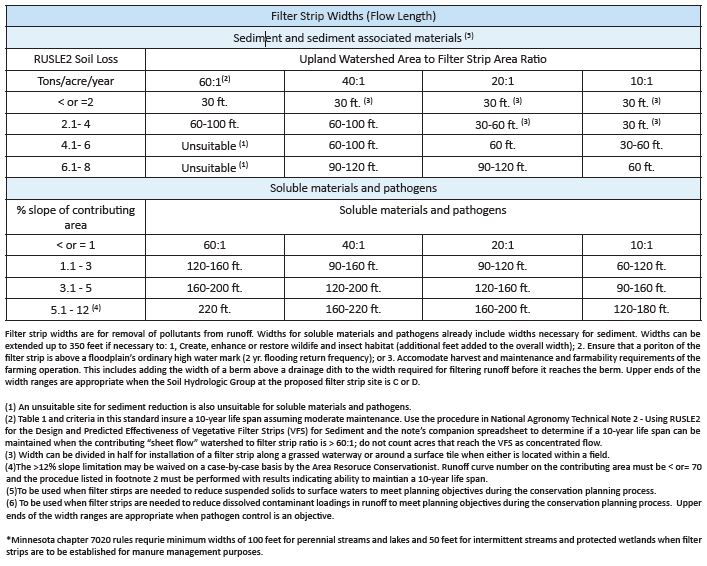 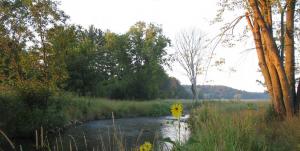 A three-zone strategy is often promoted for buffer design in forested areas with a zone of grasses and forbs adjacent to the area of disturbance to maximize filtering with grass stems. A middle zone of shrubs creates a height transition and a third zone of trees next to the waterbody stabilizes the bank and uses tree roots to intercept groundwater nutrients. This can be an effective approach to design as long as the shrub and tree planting is consistent with plant communities in the area of the planting. This may not be appropriate in the prairie regions of Minnesota, where the trees and shrubs could negatively affect habitat for ground nesting birds. 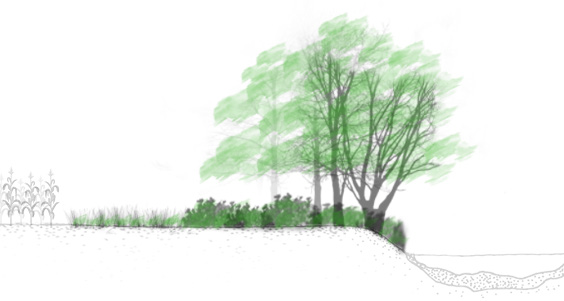 Buffers function best when used in combination with other conservation practices.